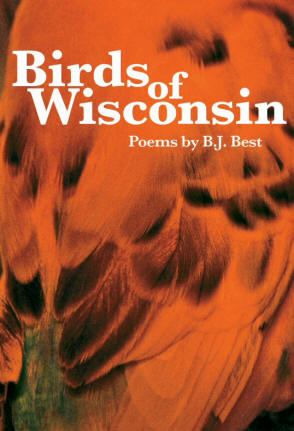 Birds of Wisconsin is a culmination of more than ten years of writing poems about birds; I initially started the project in grad school.  The strange thing to me is that while I’ve always been interested in birds, I’m not an avid birdwatcher nor did I really know much about them when I began, other than what I picked up as a kid from my parents and grandparents.  However, I wrote a few bird-themed poems, thought they were going well, and decided to see if I could build a manuscript of them.  Of course, since then, I’ve become something of a journeyman ornithologist as a result of my research in field guides and websites.  I’m particularly fond of the word supracoracoideus—the muscles responsible for flight.

Many of the poems address a single bird as a representative of its species—phoebe, junco, mourning dove, arctic tern.  Each anthropomorphizes the bird, addressing it as “you,” giving a fanciful interpretation of its habits, instincts, and life.  However, there’s also much value in seeing birds as exactly what they are—animals that don’t have the capacities for love, regret, and sorrow as we might.  I’m fortunate to have grown up with “Owen Gromme” as a household name.  He was Wisconsin’s famous wildlife artist who predominantly painted all things feathered.  His landmark 1963 book Birds of Wisconsin (from which my title was taken) earned him comparisons to Audubon.  Gromme was a realist in his art as well as his life, and my book includes poems throughout spoken in his straightforward persona.  A final set of poems, all titled “Bird Dissection,” look even more objectively about birds, literally from the inside out.  My goal is to present these creatures both interpretatively and realistically, emotionally and scientifically.  The world of independent flight is utterly alien to us, yet I suspect were we to achieve it, it would quickly become merely one more activity in the pantheon of human affairs.  These birds, then, yearn, pray, boast, and glide—perhaps not that much differently than humans do.  A few sample poems are below.

The manuscript won the Many Voices Project (MVP) competition sponsored by New Rivers Press.  I got the phone call saying I had won in May 2009, and was giddy for what seemed like months.  After that, the book went through about a year of editorial and production work.  NRP is a teaching press.  That means MFA students at Minnesota State University Moorhead, under faculty supervision, are the editors and designers for the book.  I feel very fortunate that my book went through this process, as I had a very dedicated team of students on all fronts.  For the editing, specifically, the book as presented is markedly different than the manuscript that won, and it’s vastly superior because of it.  One of the most important changes was the structure.  Originally, I had submitted the manuscript artlessly arranged in five sections (always planning on doing something about the organization later).  After lengthy discussions, the editors and I thought a birdlike structure would be best.  Therefore, sections 1 and 3 are of equal length and rather long—mimetic of wings.  The second section is short and compact, resembling a bird’s body.  Although I don’t know how important organization is to some readers, to me it was a revelation, and suddenly the book as a whole was much more elegant.

It’s an honor to have this book published, and I hope you, dear reader, will allow it to roost in the aeries of your heart.  You can purchase a copy directly from me, Amazon.com, and Barnes & Noble.

Birds was recognized as an Outstanding Achievement in Poetry by the Wisconsin Library Association for 2011!

at lizard mound county park, the bird effigies—
flightless and cumbersome as anvils—
paddle the long canoes of their wings

nowhere.  my mother said they could spear
and devour young children, that they churned
the gears of the weatherfront engines.

but i watched turkey vultures hang
unruffled over the kames, spreading air
from the serrated edges of their wings,

and i dreamed the plesiosaurs of big cedar lake
were old and dull-witted as battleships.
occasionally now, when i walk into a forest,

i realize i may have just missed one:
the air buzzes with an aftershock of flight;
old leaves are swept outward from a circle

of dirt; i’m dazzled by the green mesh of light.
my head snaps up.  say an airplane furrows
its blue field.  say i study the sky:

calm weather.  say that somewhere—very far off—
a telephone pole like the effigy of a tree
cradles a dead branch, or a kite abandoned in spring,

or else an impossibly large feather.

they were the reason i quit high school:
to muck about the bottom of the lake,
hushed in the rushes and waiting for wings
from the shores of lake winnebago.
they held me there, in early october
with their boastful chest-thrusting
or sad splashing north in late march
trodding through slushy oshkosh.

surely that is what i meant in the painting
from the east side of horicon marsh:
nineteen of them, stretched out, just hanging
like sunsets, held in mid-honk or mid-flap,
as if with a brush i had conjured
an atlas to a new constellation of birds.

they glide across our skies
like omens:  one is flying low
over cedar creek road; another
is bobbing its head like a sewing machine
on a log in mead lake, stitching crappies
into the shroud of a meal, scales
like a boatload of buttons.  their language
is shattered arabic, krauking
and fraunking out cryptograms
we might like to solve
if we could read the cursive
their wingtips write on the wind.

summer nights when we roost
on our rooftop aeries,
we stare at the sky with its basket
of bright eggs.  we draw lines
but find no mythological herons,
just glyphs of half-letters
and a moon sneezing with dust.
the herons have disappeared then,
agile as magicians, curved as questions,
these longshoremen moving
the heavy freight of karma
along the rivers of our lives.

Blue jays have it pretty good, jabbering away as they do, all sunlit and primary-colored—this is what scientists thought.  They had cracked open a dead bluebird and inside found a set of seven neatly stacked skies, each with its own few cumulus clouds and a bluebird perched in every one.  Scientists conjectured it was much the same with the jays, either skies with small jays or perhaps instead a deep, calm lake.

In the spirit of knowledge and progress, etc., they made it official, and the dissecting scientist gurgled like a guillotined chicken.  Inside, he had found:  a cage of termites, several spent and rusting shotgun shells, a photograph in black and white of seven frying eggs.  Later analysis proved that the edged, glowing bones were reject cigarettes and each blood cell was a muddied infidelity.  Its beak was deliberate and hard as a speleothem; its tongue lanced him like a gypsum needle.

In seven days he was tried and convicted by a jury of bluebirds.  He was hanged from a cloud with a noose made of feathers.